The expansion of new communication methods led to the develop of software-defined radio (aka SDR) technology that permit to adapt radio systems without perform physically changes on the hardware. SDR forum, in collaboration with Institute and Electronic Engineers define SDR as “Radio in which some or all of the physical layer functions are software defined”.

Traditionally a hardware radio device does not permit or have limits on cross-functionality. SDR provides a combination of hardware and software technology through which the radio operative functions, refer as processing physical layer, are software implemented within integrated elements as FPGA, DSP and SoC.

GNURadio is free open-source software that provide signal processing tools for implement radio systems. It can be used in association with hardware interfaces (ex. USRP di Ettus Research) or in totally simulative environment.

DWave make use of GNURadio for research and development of new terrestrial and satellite radio communication systems. Hereafter we will show a couple of applications for costumers. 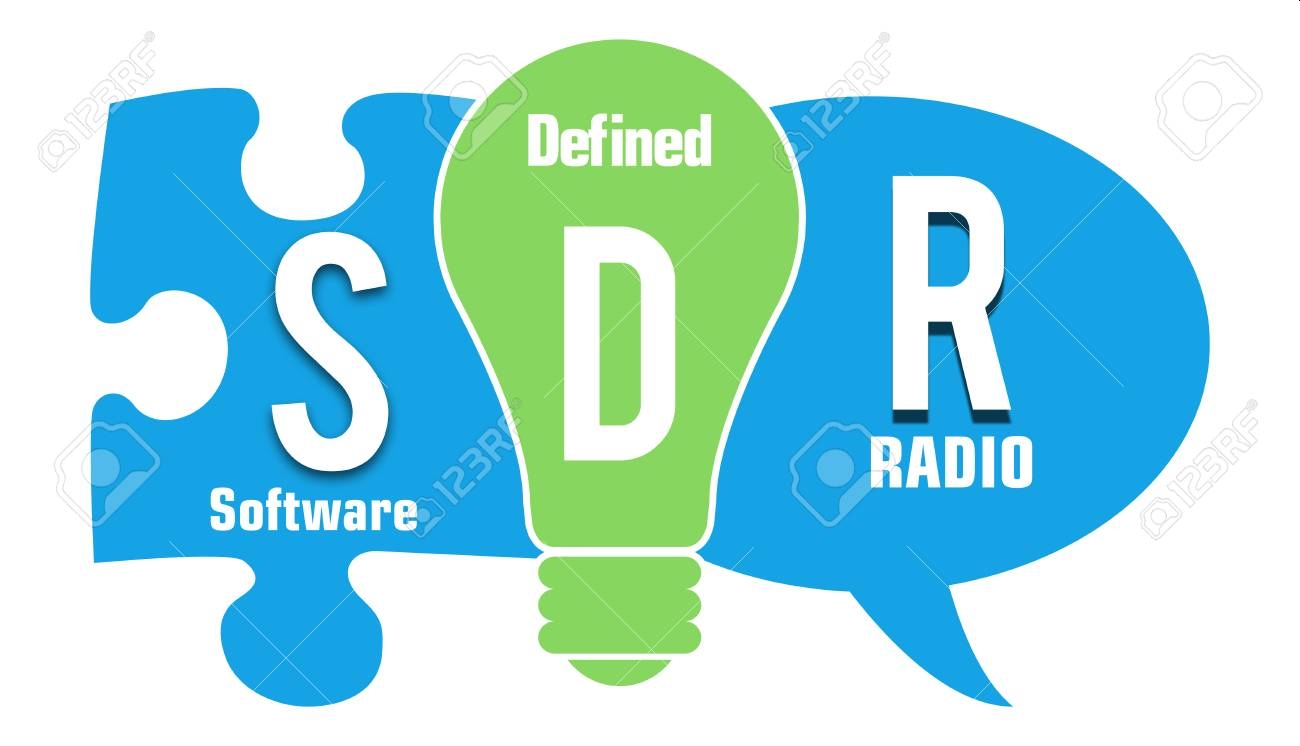 The scope of this application is the implement of a chirp modulated packets detection algorithm and study its performance over very low SNR ratio. The implementation is total simulative and figure 1.1 shows a generated packet preamble made with eight consecutive upchirps plus AWGN noise.

For the model validation, a LoRa packet generated by a SX126aDVK board was captured with Ettus USRP N210. Figure 1.2 shows the typical LoRa packet structure made with preamble, sync and downchirp.

The flowgraph of detection algorithm is shown in figure 1.3. The ‘OOT’ block named “Detection Algorithm” implement our model that is also been extended in a polyphase structure for performance improvement in certain conditions of frequency and symbol time offset. 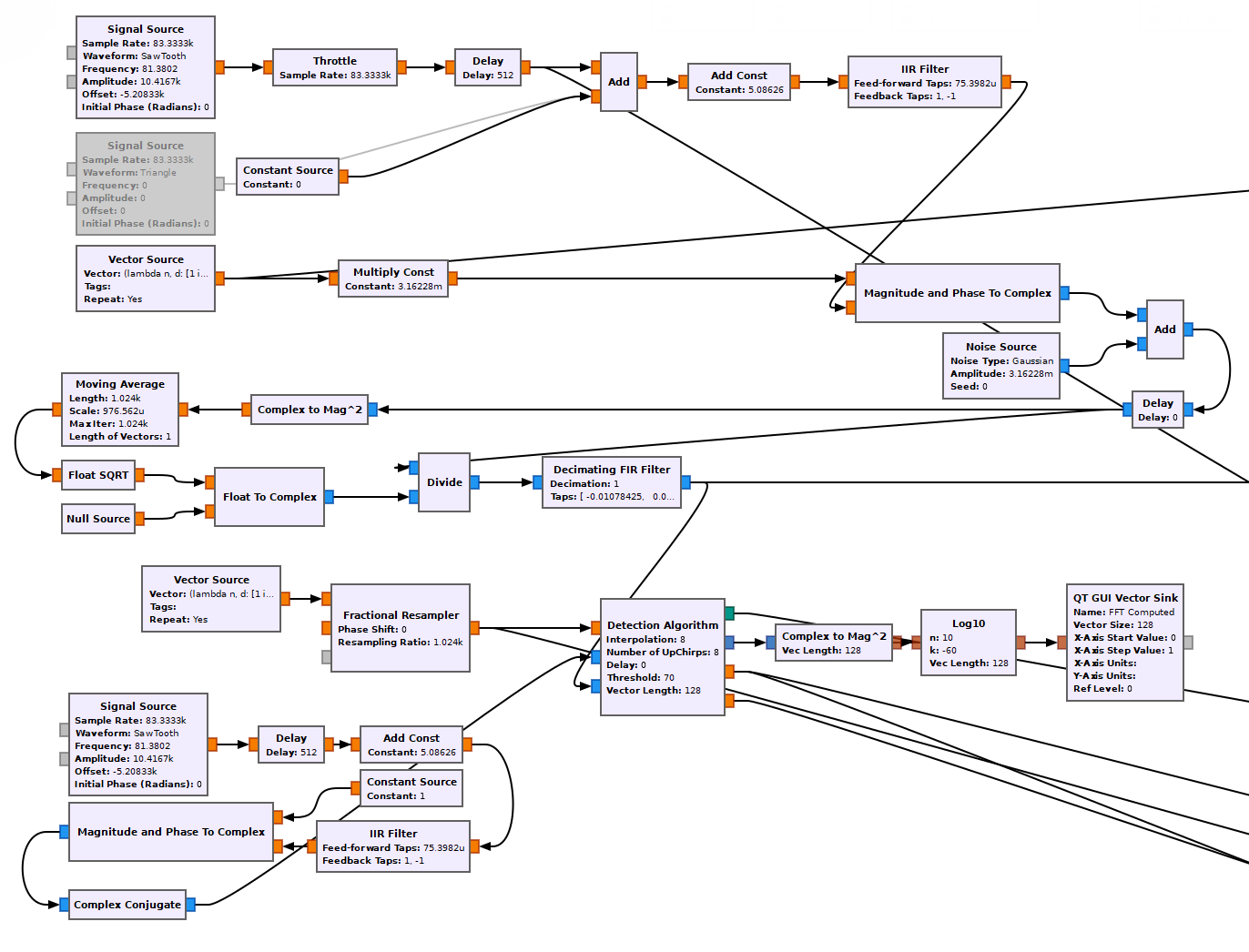 The algorithm output is shown in figure 1.4 within a SNR value of -13 dBm. The blue curve represents the time window through which the signal energy is measured and compared with a predetermined threshold. Red curve represents the convolution of ‘Threshold’ block response with a rectangular filter. Detections occur when red curve is higher than 0 at the blue curve negative ramp. Signals that exceed the threshold after the time window are false detections (see fig. 1.4, right red dots under cyan curve).

The performance of the model is analyzed by iterating the algorithm over certain number of packets. Figure 1.5 show results also with carrier frequency offset (CFO) and symbol time offset (STO) effects. 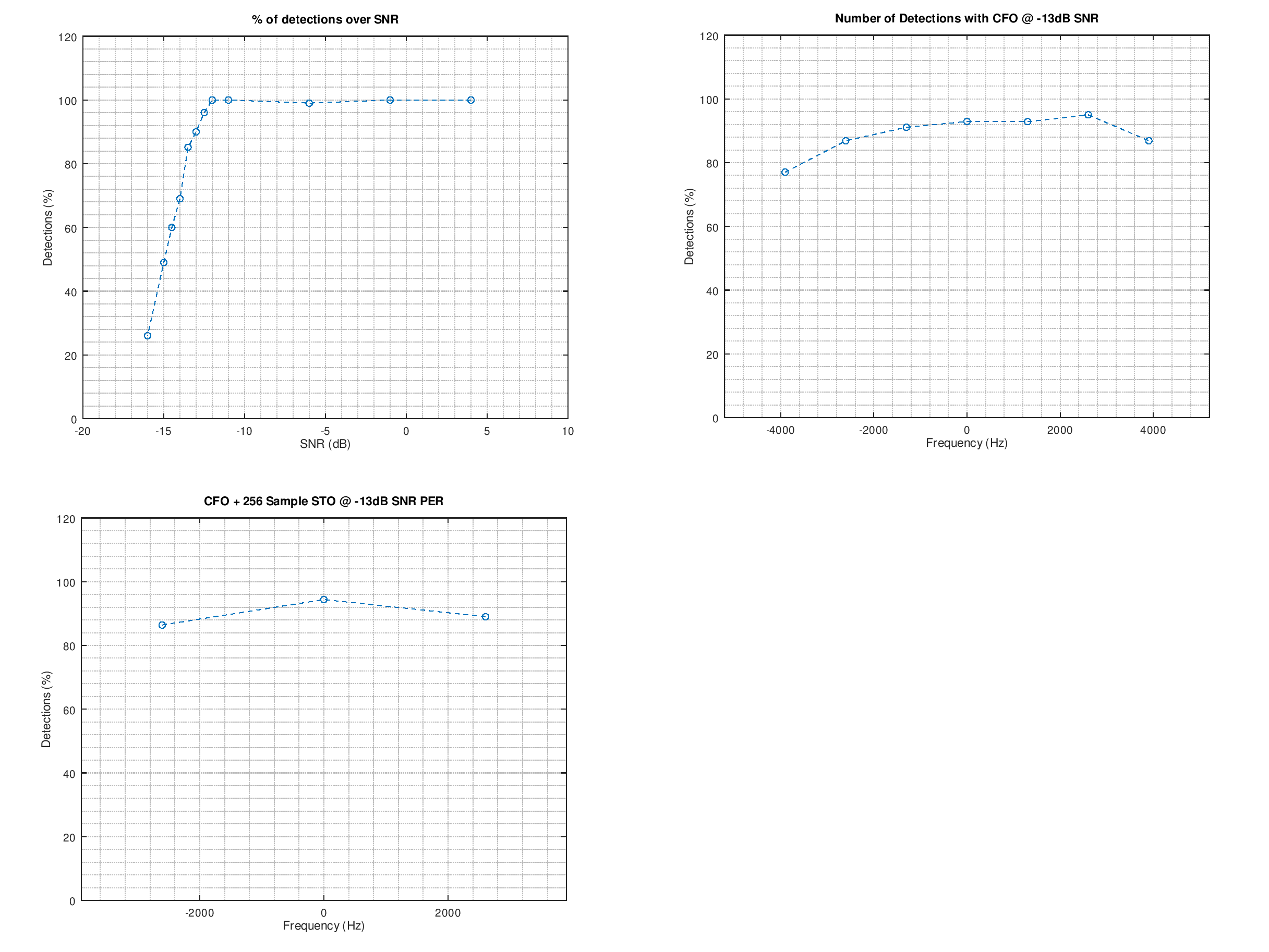 The purpose of this analysis is to characterize Semtech SX1261x LoRa transceiver for a certain application. We wanted to estimate the capability to compensate the dynamic variation of signal frequency offset, typically caused by doppler effect.

We used GNURadio and Ettus USRP N210 for collect data and perform an offline elaboration by introducing frequency variation following a predetermined curve that represents doppler rate. Modified data are retransmitted and we performed a statistical analysis of the number of received packets under certain low SNR conditions.

We use cookies to ensure that we give you the best experience on our website. If you continue to use this site we will assume that you are happy with it.OkRead more